A sentence any chicken likes to hear, especially this Astro-Chick here!
So what's the story here? Since 2005 the brown Prairie Chickens have been nesting onsite here at Johnson Space Center. These beautiful birds are listed as an endangered species in Texas and the US and so JSC and the Houston Zoo finalized a cooperative agreement.


It takes a lot of volunteer hours to keep these chickens happy! 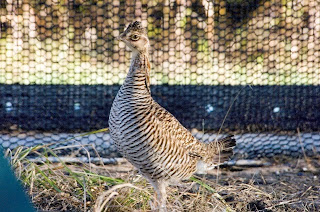 At JSC, officials have jokingly dubbed the 24 birds there Houston's space chickens.
Houston Zoo officials were thinking of a different kind of space.
Before moving some of the birds to JSC, the breeding program was housed on zoo property officials said was too noisy and didn't allow for expansion, assuming that was needed.
The relocation to JSC came about when former zoo president Philip Cannon heard then-JSC director Jefferson D. Howell Jr. speak to a group of civic leaders at the River Oaks Country Club in 2003. Cannon approached Howell about the idea.
"It really is an unusual pairing," said Zoo President and CEO Deborah Cannon. "This pairing is going to make it possible for these guys to continue to be around for eons to come."
JSC officials said they believe the partnership between it and the zoo fits the space agency's mission, "to understand and protect the home planet." 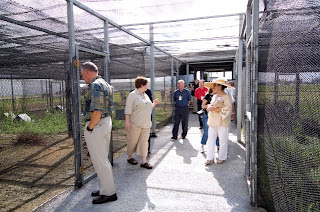 "The bird is native to Texas. It's been endangered a long time. This is about our community ties," said Robert Cabana, deputy director at JSC. "It all works together for the common good. It shows how we can work together and be successful in anything we tackle."
The first breeding season at JSC produced greater competition among male birds, more egg production per hen and more viable eggs than normal, Bailey said.
JSC also has allowed the zoo to plant eucalyptus on site. The zoo now gets eucalyptus flown in fresh from Arizona to feed its two koalas. Zoo officials said they should start harvesting the plant in early spring.
Rossignol likened the work being done with the prairie chicken to recovery efforts for the California condor.
"It's the same idea, different bird," he said. "With the Attwater being at the bottom of the food chain, it's going to be more difficult to get them to survive. We're probably still going up an uphill battle."
Posted by Camilla Corona at 10:28 AM