Today I visited the Mission Control Center. As the title says, this is where pretty much everything comes together for the US manned spaceflight. This is like the brain and nerve system. Systems are being monitored, decisions are made based on the information and orders are being sent, while ensure that everything else is working properly.

During the early days, Mercury-Redstone, Mercury-Atlas, Gemini 1, 2 and the manned Gemini 3 missions, the control center was actually at Cape Canaveral Air Force Station in Florida. (the equipment from that historic room was moved to the Debus Center at the Visitor Complex. I visited it and it was pretty cool!).

At Building 30 here at Jonson Space Center the "new" MCC was first used in mid of 1965, with Gemini 4.  In the early 1990s JSC built an extension to Building 30. The new section went operational in 1998 and offers two Flight Control Rooms. One is designated "White" and the other "Blue". White is for the Shuttle Operations and Blue, prior to 2006, was for ISS operations. But then another big remodeling phase began and even better technology was added and so ISS Flight Control moved to the totally updated MOCR1, now called FCR1.

First, let's visit FCR1 (Flight Control Room 1 for the ISS). Below is a picture of what the control room looks like during normal operations (me being there is not abnormal). 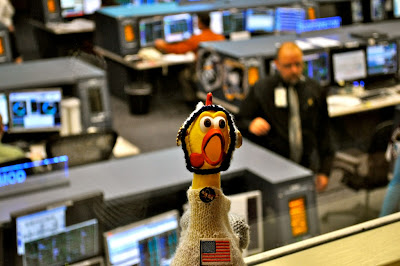 As you can see just from this frame, there are many workstations and consoles. Let's take a look at the various consoles within the International Space Station Control Room. So next time you watch NASA TV and see the FCR1, everything will be a little more clear! How about we work our way from the back left side to the front, row by row:

Row 1:
TITAN - Telemetry, Information, Transfer & Attitude Navigation
TITAN is responsible for Command and Data Handling, Communications and Tracking, and Motion Control. TITAN is part of the Gemini team, reducing the number of people working in MCC (Mission Control Center) nights and on weekends.

OSO - Operations Support Officer
OSO manages all on-orbit maintenance activities including development, training and analysis of procedures on the ground before being carried out in orbit.

ADCO - Attitude Determination and Control Officer
ADCO is responsible for all guidance, navigation and control of the station.

FLIGHT - Flight Director
FLIGHT serves as the leader for the flight control team and acts as the focal point for all decisions relevant to the space flight mission.

CAPCOM - Spacecraft Communicator
CAPCOM serves as the prime communications line between Mission Control and the station crew. CAPCOM originally stood for capsule communicator in the beginning of the US human spaceflight program.

TOPO - Trajectory Operations and Procedures Officer
TOPO is responsible for the station trajectory and plans all station orbital maneuvers. Works with Russian controllers, ADCO and the US Space Command to maintain data regarding the station's orbital position.

VVO - Visiting Vehicles Officer
VVO monitors the Soyuz and Progress visiting vehicles during docking and undocking activities while at the International Space Station.

OPS PLAN - Operations Planner
OPS PLAN is responsible for developing and coordinating operations plans and crew work schedules, or timelines during periods when the space shuttle is docked to the station.

THOR - Thermal Operations and Resources
THOR is responsible for the assembly, operations and checkout of the International Space Station's thermal control system. 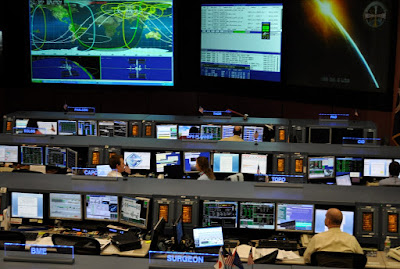 RIO - Russian Interface Officer
RIO servers as the primary interface between the United States and the International Partner control centers.

CIO - Cargo Integration Officer
CIO maintains an inventory of all supplies and equipment aboard the station. Cargo delivered to and from the space station is also inventoried.