The Simplicity of The Sun

Last night I was at grocery store waiting in line to pay for my sweets. A little boy in front of me looked at me with big blue eyes and asked "Who are you?" - "I am Camilla. And I teach about the Sun", I replied. "Do you know what the Sun is made of?", I continued. He looked at his mom then at me and said "Fire!".
I love the simplicity kids have in their young age. Later on in life we introduce them to an increased complex world and sometimes even make it over-complex. I thought today I would talk a little bit about what the Sun looks like inside and if there really is a big fire in there.


I am going to keep it very simple. 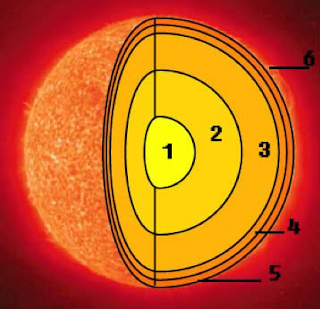 1. Core
The Sun has a Core. That is the center layer of the Sun and it is where all the Sun's heat and light is made.

2. Radiative Zone
The heat and light move from the core into this next layer.


3. Convection Zone
In this layer the gases move pretty much like boiling water. This moves them from the inner parts of the Sun to the outer part of the Sun that we see.


4. Photosphere
This is actually the part of the Sun we can see. This layer gives off the heat and light from the Sun. Cooler parts of this layer make sunspots; those big dark areas.


5. Chromosphere
This is the fun layer - it shoots out hot gases.


6. Corona
This layer is like the far, far away uncle we only get to see on special occasions. The Corona can be seen during an eclipse and is the atmosphere around the Sun.


Can all of it be this simple? Unfortunately no. I'll give you a very complex example.


Sunlight is produced through nuclear reactions in the sun's core. Originally born as energetic gamma rays, after billions of collisions with matter, this radiation reaches the surface and escapes into space. How old is sunlight by the time it reaches the surface?

Most textbooks say that it takes light between 100,000 years and 50 million years to escape. You would be surprised to know that this simple, and very popular, question seems to be without a firm answer! The reason has a lot to do with the assumptions that textbook authors use in making the calculation. Most astronomers are also not particularly interested in a high-accuracy answer, so they tend not to bother doing the tedious calculation exactly. It is actually a very complex problem in physics!
Once a photon of light is born, it travels at a speed of 300,000 km/sec until it collides with a charged particle and is diverted in another direction. Because the density of the sun decreases by tens of thousands of times from its lead-dense core to its tenuous photosphere, the typical distance a photon can travel between charged particles changes from 0.01 cm at the core to 0.3 cm near the surface. As a comparison, most back-of-the-envelope estimates assume that the sun's interior has a constant density and that the 'free path' distance for the photon is about one centimeter. It is these estimates that find their way into many popular astronomy textbooks.
Once you know, or assume, a typical distance between collisions, you also have to figure out how many steps the photon has to take to travel from the core to the surface. This is called the Random Walk Problem. The answer is that, if you take a sequence of N random steps, each for example of one meter length, the distance you travel from the starting point will be the square-root of N. After 100 random steps you will travel about 10 meters, but it will take 10,000 steps to travel 100 meters, and one million steps to travel about one kilometer, and so on. Because the density of the sun changes from the core to the surface, it is common to represent the interior of the sun as a collection of nested shells of matter, each with a typical average density. You then calculate how many steps it takes for a photon to travel through each shell. During each step, the photon travels at the speed of light so you can calculate the time required for each step. By multiplying this by the number of steps taken, you can calculate how long it takes the photon to traverse each shell, and then add up all the times for the other shells.
When this random walk process is applied to the interior of the sun, and an accurate model of the solar interior is used, most answers for the age of sunlight come out to be between 10,000 and 170,000 years. Rarely do you get answers greater than a million years unless you have made a serious error! Why do you still see these erroneous estimates of '10 million years' still being used? Because textbook authors and editors do not bother to actually make the correct calculation themselves, and rely on older published answers from similar textbooks.
So, sometimes a simple question can have many inaccurate textbook answers because it is not considered a very important question to scientists, and no one bothers to take the time to really work out the answer to their best ability! As another example, in 1971, the physicists Alfred Goldhaber and Michael Nieto at the Los Alamos Laboratory estimated the maximum mass of the hypothetical graviton particle - the carrier of the force of gravity. Their answer of 10-62 grams seemed incredibly insignificant. Over a decade later they published an improved version of his original paper. They noted that they had originally made an error in their 1971 paper, so that the calculated mass was actually over a billion times larger. In all that time, no one had ever caught the published error! 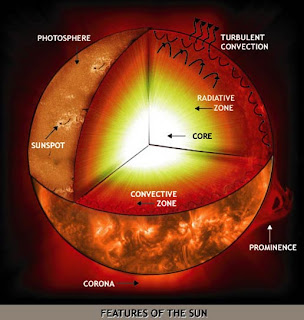 Posted by Camilla Corona at 7:06 AM 6 comments: