Today I am spending time with Stephen and let me tell you, he is way fun and let's me get my hands on all the buttons! He took me back to the Mission Control Center here at JSC.
My friend, Stephen, is a flight controller for the International Space Station. We sat at the  ODIN console and watched the Expedition 25 crew members work onboard the ISS completing maintenance tasks and performing science projects. ODIN (which stands for Onboard Data Interfaces and Network) is one of several flight controllers in the control room. Each controller is responsible for a different system onboard the ISS.
ODIN manages the computers of the ISS, which requires a lot of commanding from the ground to keep the crew safe. The 47 onboard computers integrate with and control the other avionics systems of the ISS: thermal, power, communications, navigation, environmental.  I was even able to command the Space Station's computers as it travelled around the Earth at 17,500 miles per hour! (once I get to the ISS I will be the fastest traveling rubber chicken in history!).
Stephen was so kind to me and even gave me an ISS Expedition 24 pin for my EVA suit.
Not only that - but he took me into the original Apollo control room. This is truly an amazing room. That's where the Apollo 11 mission was flown from and people inside this control room witnessed the first human foot steps on the moon. Further more, Gene Granz and his team successfully brought home the Apollo 13 crew right from inside here.
But first, let's talk about Stephen for a second.
Tell me Stephen, when you were a kid, what were your dreams?
"As a kid, I always dreamed of one day flying into space onboard a Space Shuttle.  Movies like "Apollo 13" made me feel like I was part of the action.  As I always had this dream of being an astronaut, it became a reality that astronauts are not the only defined heroes of human spaceflight."
I love hearing that. But it is not easy to become an Astronaut. Look at me, my Space Flight future is uncertain. But like you said, there are so many people behind the scenes that make sending people to space reality.
"Yes, there are thousands of people on the ground that make human spaceflight a reality.  I joined the ISS flight control team in 2007 following graduation from Louisiana Tech University."
And what do you do here in the ISS flight control room? 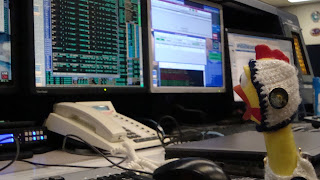 "As an ODIN (Onboard Data Interfaces and Networks), I am responsible for command and control of the onboard ISS computers.  These computers are not your average PC, as they control all of the onboard avionics systems which make long-duration human space flight possible on the ISS.  Being a flight controller of a space vehicle takes years of training and certification.  Being tough and competent and ready to handle any onboard failure or emergency is what we train for over and over again.  Priority number one is to keep your crew safe onboard.  Problem solving skills are important, as are discipline and communication."
Stephen, everyone I have met in here and the Shuttle control room, is truly amazing! You guys have a lot of responsibilities. I have a lot of respect for all of you and know that I know more about what you all do, I am even more excited to watch the various interactions between you, the crew on the ISS and the crew on the Shuttle during a Shuttle mission.
After we finished our work in the ISS control room (known as FCR-1), we headed to the historic mission control room from the Apollo program.  Known as the MOCR (Mission Operations Control Room), this is the very room where the flight control team landed the first humans on the moon during the Apollo 11 mission and where Flight Director, Gene Kranz, led his team to a successful return of the Apollo 13 crew.  Wow! 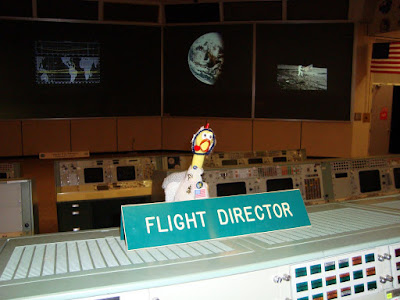 There were two Mission Operations Control Rooms (MOCR) in the early days. MOCR1 was used for Apollo 7, Apollo-Soyuz Test Project and the Skylab mission. But MOCR2 was used for all other Gemini and Apollo flights. It was last used in 1992 for the STS-53 mission and then was converted back to its Apollo-era configuration and preserved for historical purposes.
These consoles are very different than those the Space Station and Shuttle control teams use. The Apollo teams had very little data on their spacecraft that landed on the moon. Even though the control team told me not to, I decided to push the big red button on the console. I followed that up with a quick call on the red phone in the back of the room.  It's a good thing the Apollo room is not actively controlling a space vehicle anymore, or we could have been in trouble!
It was amazing to see how space vehicles such as the Apollo spacecrafts, the Space Shuttles, and the International Space Station are managed by the ground controllers.  The Space Station team in Mission Control Houston work 24 hours a day, 7 days a week to keep humans in space.  The US control team manages many onboard systems that all interface with the Russian, European, and Japanese segments.  This really shows how international cooperation can lead to great things, and I was happy to be a part of it!
The red phone was the Mission Control team’s direct link to the US Department of Defense.  If the crew or ground team ran into “issues” requiring the assistance of the DoD, they would have a way to get quick response.  The Space Shuttle program also supported classified DoD missions from this very room prior to the  accident, and the ISS program supports some DoD payloads onboard.  The direct link to the DoD still exists, but the red phone in the Apollo MOCR is quite symbolic.
Posted by Camilla Corona at 8:46 AM