After my note about Space Food Systems Laboratory I got so many more questions about the actual food and meals Astronauts eat. Here I will try to answer some of those questions. 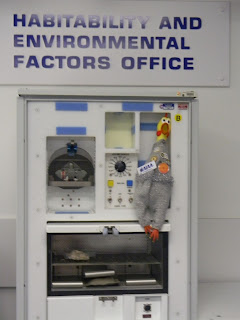 First and foremost, the foods they eat aboard the Space Shuttle or the ISS are neither blend nor unsavory. The food systems and menu items have evolved tremendously since the days of the Mercury Program. Just check out the previous notes with pictures of the menus.

John Glenn, America's first man to eat anything in the near-weightless environment of Earth orbit, found the task of eating fairly easy, but found the menu to be limited. Other Mercury astronauts had to endure bite-sized cubes, freeze- dried powders and semi-liquids packaged in aluminum tubes. Most agreed the foods were unappetizing and disliked squeezing the tubes. Moreover, freeze-dried foods were hard to rehydrate and crumbs had to be prevented from fouling instruments.
Gemini brings improvements
Eating on the Gemini missions improved somewhat. Bite-sized cubes were coated with gelatin to reduce crumbling, and the freeze-dried foods were encased in a special plastic container to make reconstituting easier. With improved packaging came improved food quality and menus. Gemini astronauts had such food choices as shrimp cocktail, chicken and vegetables, butterscotch pudding, and applesauce, and were able to select meal combinations themselves. 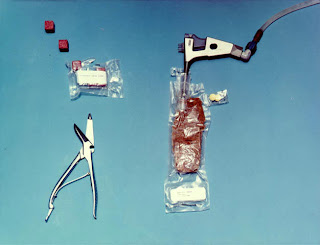 
The surface food system, be it lunar or planetary, will be quite different. It will be similar to a vegetarian diet that someone could cook on Earth – minus the dairy products. Once crewmembers arrive on the surface and establish living quarters, they can start growing crops. Possible crops that could be grown and harvested
include potatoes (sweet and white), soybeans, wheat, peanuts, dried beans, lettuce, spinach, tomatoes, herbs, carrots, radishes, cabbage and rice. Once the crops are processed into edible ingredients, cooking will be done in the spacecraft’s galley to make the food items.
BTW - curious what Space Shuttle Commander Steve Lindsey ate for breakfast during Flight Day 2 on STS-104?
Granola w/Raisins - Rehydratable
Breakfast Roll - Fresh Food
Pears - Thermostabilized
Vanilla Breakfast Drink - Beverage
Kona Coffee w/C & S X2 - Beverage
Earl Grey Tea w/ Sugar - Fresh Food
Oh, and here is a fun video of Astronaut Soichi making Sushi on the ISS!
Posted by Camilla Corona at 3:15 PM