NASA JSC - Cindy; From Challenger to working on the ISS

The more time I spend here at NASA's Johnson Space Flight Center, the more people I get to meet, the more I realize that every single person so far has had a dream. A dream to someday work around space science or exploration. Many of the wonderful people I have met here knew as kids that they someday wanted to really reach for the stars. Others realized in their teens that Astronomy or Space Science was their calling. What it has taught me so far is that no matter what your dream is, no matter what it is you want - you can make it happen. Yes, it takes determination, patience and sometimes some luck. And not always is it a straight shot. Sometimes there are detours - and it's not always about the goal, but about the journey too. And after all, life is not a sprint, but a marathon.
Today I would like to introduce to you to another very special friend of mine. Cindy and I have known each other for some time and she has kindly offered to host me, make my bed most nights and share her sweets with me. (Sorry Cindy for raiding your chocolate stash the other night...).
Let me go back a few years - when Cindy was in fifth grade. She would play basketball but run home as soon as practice ended because this show called Star Trek was airing on TV. Cindy sat in front of the TV watching how far human kind in this series has gotten.
She then joined the Young Astronauts Club at school and like the entire world, was truly heart broken when we lost the crew of Challenger. That day she made up her mind to step into their footsteps and finish their mission, thinking that she would have enough time as NASA was still going to study Halley's Comet.
So little Cindy put her mind to it and continued her education, which took her to Purdue University for an aeronautical and astronautical engineering undergraduate degree and a MBA from Rice University. While at Purdue University Cindy was the President of SEDS and she established numerous educational outreach programs for K-12 students because she felt it was important to inspire the next generation and give them opportunity to explore.  Cindy also applied 3 times for a Space Camp Scholarship and was selected in 10th grade to attend Space Academy LevelII - her winning paper was on NASA spinoffs.
Then about 12 years ago she started working on the International Space Station (ISS) Program in Guidance, Navigation, Control & Propulsion (GNC/P). As an instructor she was responsible for integrating the U.S. and Russian GNC astronaut training flow, combining the best aspects of both training programs. For that worked she was warded the Silver Snoopy award! (Cindy treasures that award to this day and I asked her to hang it above my bed while visiting her!). Cindy also traveled to Star City in Russia many times and spent many months at the Gagarin Cosmonaut Training Center to negotiate and develop and integrated training flow and lessons.
Systems Integration is the area most of her career has been spent, working on the esteemed ISS Vehicle Integrated Performance, Environment & Resources (VIPER) Team. She served as the lead of the VIPER Console in the Mission Evaluation Room (MER) responsible for preparing for most of the docked Shuttle missions to ISS and training our team to support console 24/7. In addition she provided numerous integrated solutions for problems, such as water dumps, gravity gradients, and debris avoidance maneuvers.
The past two years Cindy worked as a NASA contractor on the Constellation Program, again as a system engineer, primarily responsible for requirements design compliance, making sure the spacecraft and rocket designs meet the intent of NASA's requirements. The Constellation Program was developed to return humans to the moon to learn the skills required and develop the necessary technologies to then tackle a manned trip to Mars. 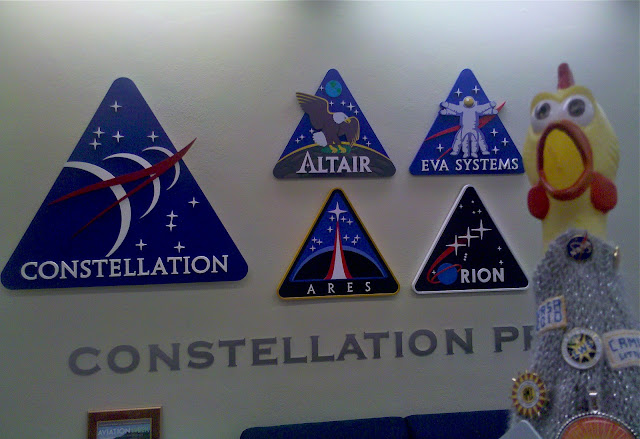 These days Cindy is working on many internal projects for an Aerospace Company. One close to hear heart is called Project Moongoose (named by followers on Twitter). Project Moongoose hopes to provide ISS participatory exploration.
Cindy can be followed on Twitter at @txflygirl - her updates are her own thoughts and impressions.
Posted by Camilla Corona at 10:25 AM