After all this training here at Johnson Space Center, I am now ready of the ultimate test; how do I perform in Zero Gravity? 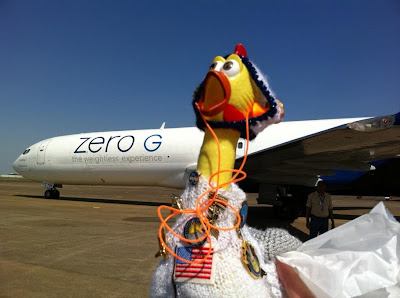 Thanks to yet another wonderful friend, Tim, he made this training and experiment possible. The Zero G Corporation operates a modified Boeing 727, nicknamed G-FORCE ONE and by flying aerobatic maneuvers known as parabolas, weightlessness is achieved. 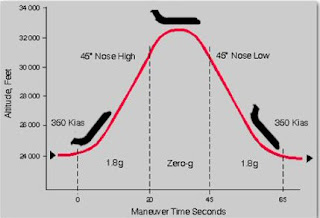 Let's quickly see how this works. The airplane flies level to the horizon at an altitude of 24,000 feet. The pilot, which in this case is not me since I am in the back of the plane, gradually increases the angle of the aircraft to about 45 degrees (nose high) to the horizon, reaching an altitude of 34,000 feet. During this particular pull-up, passengers feel the pull of 1.8 Gs, which is 1.8 times the gravity of standing on Earth at sea level. Now comes the fun part - the pilot pushes the airplane 30 - 45 degrees down (nose low). This "pushed over" creates the zero gravity segment of the parabola.

So in other words, the feeling of weightlessness is achieved by reducing the airplane's trust and lowering the nose to get a zero-lift angle of attack. It's like this roller-coaster which goes over this hump and you feel like your getting out of your seat.

Anyway, for the next 20 - 30 seconds everything in the airplane is weightless. The pilot then does a gentle pull-out and all the floaters in the airplane become slowly stable again and settle on the aircraft floor. This process is repeated several times and each time the passengers get to feel that wonderful feeling of being so light, that you float away. 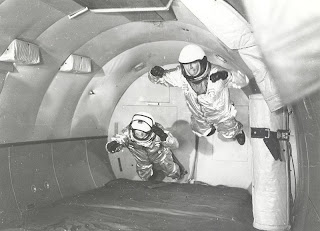 This practice goes back to the late 50s. NASA's Project Mercury astronauts trained being weightless in a C-131 Samaritan aircraft - and that's where the nickname "Vomit Comet" started; all because of the nausea that is often included in doing these parabolic flights. It is believed that anxiety contributes to most passengers' airsickness. John Yaniec, a former Reduced Gravity Research Program Director, estimates that one third become violently ill, another third moderately ill and the final third is all fine. If it gets to the stage of vomiting, it is referred to as a "kill". Since 2005 NASA is using a McDonnell Douglas C-9B Skytrain II for its zero gravity training.

So, let's get this party on the road, or better, into the sky!

My morning started with a good breakfast! It's important to eat good and make sure you have all the strength.

I went to The Egg & I place - what better breakfast joint could I have found?

From there I drove to the airfield and when I arrived, I did the check-in, had to show my picture identification and then got introduced to my team. We had a Pre-Flight Orientation and there I watched a video of a Zero-G flight and got all the information I needed. I was surprised to learn that I still had to go through security. Well, they did the security screening and I again, passed with flying colors!

Once through security I was waiting for the transportation to the aircraft. So I sat back and just reviewed my last few weeks and all the great things that I had come across. I had met so many people and they all play an important role in making human space flight and space exploration possible. It's amazing! I am truly a lucky chicken and mascot.

It's time for me to take my seat, fasten my seat belt and get ready for take off. Depending on the approved airspace it can take about 30 minutes to reach the appropriate altitude. Just like in a commercial airline, you have to follow the rules. Smoking is NEVER allowed on an aircraft. Fasten your seat belt unless notified by an uniformed crew member. 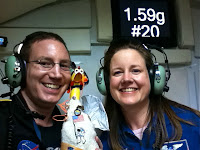 This is my dear buddy Tim Bailey and NASA Test Director Shelley Baccus. They both were assigned to make sure I was fine and that I passed all the requirements. They do not feel queezy anymore - they both have experienced thousands of parabolas and they are the pros of the pros! As you can see I am currently experiencing 1.59 Gs and my well trained body is handling it without a problem.

Round 1; this is me floating. Poor Tim wasn't had a hard time to keep up with me and so the pictured turned out blurry. But that's me floating for the very first time.

After the first parabolic segment I quickly went back to my seat to make sure I was all right. I took a few deep breaths and realized that I do not need a vomit bag. So I took it home as a souvenir.

Time for my second experience of feeling weightless! This time I was doing so much better (and so did Tim with the camera). I can tell he is a pro. (and he thought to himself "I can tell that Camilla is a pro!"). 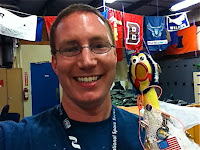 After the flight Tim and I were hanging out and laughing about all the passengers who got sick. One lady really "killed"!


Watch the video of my experience - however, do not say I am "bottom-heavy!"