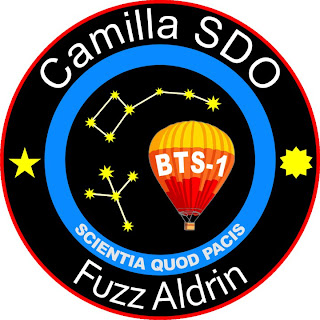 Mission Raise Awareness Space Balloon (RASB) –
The mission patch of the RASB project is based upon the symbols of both Fuzz Aldrin and Camilla SDO's purpose.

The blue ring highlights our planet Earth. The words Scientia quod Pacis around the edges of Earth represent both Camilla and Fuzz's mission; Science Education and Peace. The color white was chosen for Scientia quod Pacis to symbolize that not even the sky is the limit. The red outer ring, the blue inside ring and the white font represent the colors of the United States of America flag and are dedicated to all our U.S. Astronauts, active, retired and the ones who have lost their lives in the name of Space Exploration.

The star on the left is for Fuzz and signifies the night time peace and our children of the future, while the dawning Sun on the right is spreading its light across Earth during day time and represents Camilla and the NASA SDO education and mission.
Similarly to NASA’s Space Shuttle mission (STS, which stands for Shuttle Transport System) the RASB choose the abbreviation BTS for Balloon Transport System. Since the upcoming launch will be RASB first, BTS-1 has been assigned.
Information about the AstroMascot Crew: 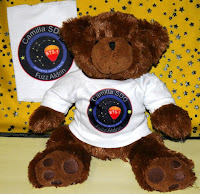 Fuzz Aldrin joins Miles the Traveling Bear as a touring ambassador of Bears on Patrol. While Miles is raising awareness on a personal level by meeting people, Fuzz is taking a global approach, joining forces with Camilla Corona SDO to promote science education and peace for our children.
Bears on Patrol seeks to make traumatic situations bearable for children by providing free teddy bears for police officers to give to children they encounter on calls.
For more information:

Little SDO is NASA's Solar Dynamics Observatory and is designed to help us understand the Sun's influence on Earth and Near-Earth space by studying the solar atmosphere on small scales of space and time and in many wavelengths simultaneously.
For more information: