From Star City, Russia - With Love!

Hello from the Russian Gagarin Cosmonaut Training Center in Star City, Russia. Today was truly an amazing day on so many levels. I'll get to it shortly.
But first, today we also remembered the passing of Colonel Yuri Gagarin in 1968. He died in a MiG-15 airplane crash at the young age of 34. Only 7 years earlier he had become the first human to visit Space. The Russian Cosmonauts went to the Red Square today to remember Yuri, a true Hero. I visited the his statue here at Star City.
Here is a quick video I put together remembering Yuri's first and only flight to Space. He made major history that day of April 12, 1961.
Today Astronaut Reid Wiseman and I finally got into the Soyuz simulator for a few hours. It is smaller than I thought in there! 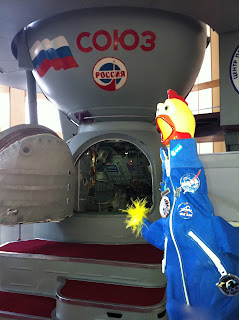 Conceived in 1960, the Soyuz spacecraft became the second-generation Soviet vehicle capable of carrying humans into space. Unlike its predecessor - a one-seat Vostok - the Soyuz would be able to conduct active maneuvering, orbital rendezvous and docking. These capabilities were all necessary for a flight around the Moon and to support lunar landing. In the early scenario of a "circumlunar" mission, defined in 1962, the Soyuz complex would be assembled in the low-Earth orbit out of three consecutively launched elements.
Over the years the Soyuz went through several upgrades, from the original 7K-OK (which started off with a deadly accident; Soyuz-1 (also called "Union") with a veteran cosmonaut Vladimir Komarov onboard, experienced a parachute system failure during landing and Komarov tragically died. Yuri Gagarin was his back-up crew), to the 7K-L3 (LOK, designed to orbit the Moon), the 7K for station plans, which also experienced a tragedy of mission Soyuz-11 where three cosmonauts died as a result of decompression of their reentry capsule on the way home.
In 1978 the Soyuz T Transport was introduced and carried its first crew to Space in 1980. The Soyuz TM (Modified) added additional enhancements and was used to the deliver a crew to Mir the first time in 1987. In the late 1990s the Soyuz TMA (Anthropometric) version got into production and after some delays, the TMA version finally flew in 2002. 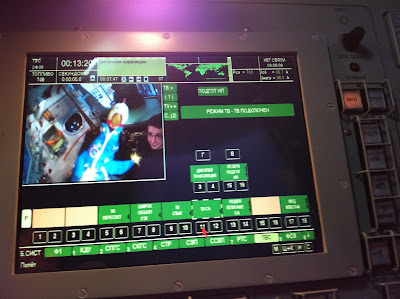 The TMA-M, became the latest step in a series of gradual upgrades to Russia's legendary manned transport. Originally designated as Series 700, Soyuz TMA-M was also informally known as "digital Soyuz," - a reference to an advanced flight control computer onboard. The first launch of the TMA-M occurred on October 7, 2010 with NASA's Scott Kelly on board.
The way the Soyuz capsule is configured it is rather difficult to reach the control panel and all the buttons. So the crew uses this awesome stick to press buttons. The stick is actually called the ykazka (oo kaz ka) from the Russian ykazatb (to point).
So the Soyuz TMA increases safety, especially in descent and landing. It has smaller and more efficient computers and improved displays. In addition, the Soyuz TMA accommodates individuals as large as 6 feet, 3 inches tall and 209 pounds, compared to 6 feet and 187 pounds in the earlier TM. Minimum crewmember size for the TMA is 4 feet, 11 inches and 110 pounds, compared to 5 feet, 4 inches and 123 pounds for the TM.
Two new engines reduce landing speed and forces felt by crewmembers by 15 to 30 percent and a new entry control system and three-axis accelerometer increase landing accuracy. Instrumentation improvements include a color "glass cockpit," which is easier to use and gives the crew more information, with hand controllers that can be secured under an instrument panel. All the new components in the Soyuz TMA can spend up to one year in space.
One of the most fascinating tools used inside the Soyuz capsule is this stick! The way the instrument panel is configured and how the astronauts are situated in their seats, this stick is used to push buttons. This tool is actually called the ykazka (oo kaz ka) from the Russian ykazatb (to point). 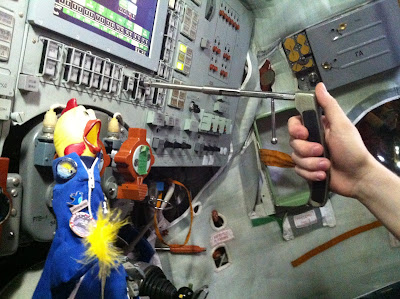 I did tell Reid that I could be of multiple uses during a mission. I could not only give out very good commands and say very smart things, but I could actually be used as one of those button pushers! Beats my paper-pushing job by far... 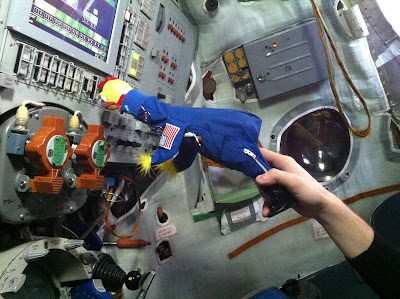 Later that day I offered to take a picture at the end of Reid's first Soyuz Motion Control class. His instructor was Виктор Суворов, and he has been teaching motion control since 1965! The motion control syllabus will take roughly two months to complete and is considered the most difficult portion of Soyuz training. 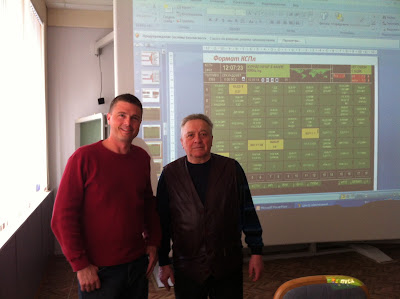 I decided to help Reid study. After all, what could possibly go wrong with having me around?!
Remembering Yuri Gagarin; March 9 1934 - March 27, 1968
Posted by Camilla Corona at 1:26 PM