NASA's first "A" stands for Aeronautics. But what exactly does this mean and how does this impact my work?
Well, I thought today would be a great day to talk about "Aeronautics". Why today? Because I just landed from my first T-38 piloting gig. For realz! But first things first.

Aeronautics has been part of NASA for more than 50 years. Before that, the National Advisory Committee for Aeronautics conducted pioneering research that influenced the design of every U.S. aircraft. NASA integrated that knowledge and existing testing facilities when it was created in 1958.

Ok, enough about that. Let's talk about flying a little more. In fact, let's talk about one of the iconic NASA airplanes; the T-38 Talon. It is also called "White Rocket" because of its NASA paint scheme (largely white with a blue stripe down the length of its narrow fuselage). The 38s have two GE J85-GE-5 turbojets engines with afterburners, reaching a top speed of up to Mach 1.6, and soar above 40,000 feet, which is about 10,000 feet higher than airliners typically cruise.


The two seater can wrench its pilots through more than seven Gs, which is seven times the force of gravity. I am telling you, that is enough to make simple lifting a hand a very hard chore and makes my neck feel like it is balancing on a cinder block. Besides, the average person blacks out. Not me though. 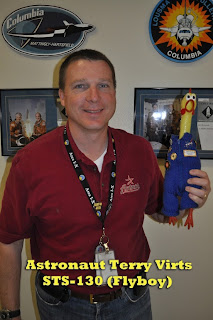 There are several NASA astronauts who learned to fly the T-38 during their time in the Air Force. Terry Virts for example, who learned to pilot this sleek plane when he was a 21-year-old lieutenant. I remember Terry saying how it doesn't pull Gs like a frontline fighter, but the 38 can do rolls amazingly well. And believe me, I had always wanted to jam the stick to the side and see the plane roll, really fast roll. Today, when I flew and did a bunch of rolls I was like "Okaydokey, that's enough rolling for now!".


Did you ever wonder why NASA's astronauts need to fly this great airplane? Anyone who did not fly a T-38 before they got to NASA learned to fly it once they joined the astronaut corps. Basic Astronaut training includes T-38 courses, and mission specialists, who dido not sit at the controls of the space shuttle, had to record four hours a month of stick time. Commanders and pilots were required to fly 15 hours a month to keep up their proficiency.

But the T-38 is also used for other aspects, like scout weather conditions during the hours before liftoff, chase other aircrafts and report about flight characteristics and yes, it also served as a training tool to simulate a Shuttle landing. So the T-38 was modified with some extra-large set of air brakes on the bottom of the plane and the astronaut pilots had to prove it could fly safely with the landing gear down and those air brakes open. With those steps in place astronauts could point the T-38s nose down at the ground and fly it toward the runway faster than 300 mph. It wasn't an exact physical simulation but flying these approaches in a T-38 showed the astronauts what a landing in the Shuttle would look like, time and time again.
Furthermore, flying the T-38 also helps pilots with spacewalking. Yup! That's right. Even though mechanically there are no similarities. A spacesuit does not have a control stick and rudder pedals. However, on the mental side, a T-38 and a space suite have critical supplies that cannot be allowed to run out. That means the operator in both cases have to follow their progress carefully and make sure that they aren't using too much fuel, in case of the T-38, or running low on oxygen, in case of the spacesuit. 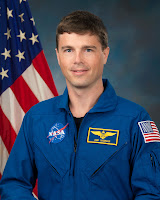 Anyway, this morning I had breakfast with Astronaut Reid Wiseman. Reid, an U.S. Naval Test Pilot, who has flown the F-14 Tomcat (one of my favorite birds), and the F/A-18F Super Hornet, was a very comfortable choice for me to be my instructor. I decided on some greasy food, since that helps with airsickness. So I had a piece of pizza while Reid only had a peanut butter and jelly sandwich.

Well, off we went to the airfield, boarded the plane and took off...


Since we are talking about flying - do you know Space Weather has a big impact on flying too. There are several issues - as you know a solar flare's main effect is an atmospheric one. So if you are a high-frequency radio communicator in a ship at sea or flying in a place, you might not have a working high-frequenzy radio signal during those flares.

Maybe even more of an issue could be the loss of a power grid. See, when a coronal mass ejection hits the Earth, currents are being induced into our power grid. This could cause to overhead transformers and take down entire power grids. Also, during solar storms airlines avoid flying very northern routes because of the increase radiation doses. Now also include that Space Weather can have effects on satellites and the fact that navigation signals, weather maps and GPS signals could get lost. Hey, even Air Force One once lost all radio contact while flying over the pole.

Since the early 1800's, all aspects of our technology have been affected by severe solar disturbances beginning with telegraph outages during 1850-1900, radio disruptions between 1910-1960, and then during the Space Age, satellite outages and failures between 1965-2006. Ground-based electrical power systems have blacked out (Quebec, 1989) and airline flight crews have begun to worry about radiation exposure during solar flares. All of these events can be traced to the interaction of the Sun with Earth's magnetic field and its environment in space.

Well, I am now back and have recovered from my several aileron rolls with Reid. We had a good flight, a nice landing and I hope you learned a few things too. Don't stop here. I have a few good links for you below. One to a cool Air Traffic Control game and two others to learn more about Aeronautics and Solar Storms, especially if you are a teacher.

Stay tuned... I am heading to Star City Russia soon...


Talk to you soon!
Camilla & Reid
Posted by Camilla Corona at 1:46 PM