Solar Storm - The Perfect One! 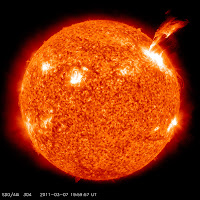 On March 7th 2011 the Sun had a fairly busy day. It was fun watching the many solar flares that day go off. There were seven M-class flares that day. I got many questions like "Is this normal?" and "Should we be worried?" My answer is "Yes" and "No!". We are approaching solar max - the period where the Sun is more active and produces more of these M and X-class flares.
We classify solar flares according to their x-ray brightness in the wavelength range of 1 to 8 Angstroms and categorize them in 3 categories:
X-class Flares: These are the big ones and are major events that can triggers some serious issues here on Earth. We could experience radio blackouts and long lasting radiation storms.
M-class Flares: Just as in close, the Ms are a medium size. They can cause brief radio blackouts that affect Earth's polar regions with some minor radiation storms.
The C-class Flares: Those are the small ones with few noticeable consequences here on Earth.
A few months ago I wrote about:
"Space Weather - A different Kind of Storm"
"Space Weather - Impact on Life on Earth"

Let's go back in time some 150 years - that's when the "Perfect Solar Storm" happened.
In scientific circles where solar flares, magnetic storms and other unique solar events are discussed, the occurrences of September 1-2, 1859, are the star stuff of legend. Even 151 years ago, many of Earth's inhabitants realized something momentous had just occurred. Within hours, telegraph wires in both the United States and Europe spontaneously shorted out, causing numerous fires, while the Northern Lights, solar-induced phenomena more closely associated with regions near Earth's North Pole, were documented as far south as Rome, Havana and Hawaii, with similar effects at the South Pole.
What happened in 1859 was a combination of several events that occurred on the Sun at the same time. If they took place separately they would be somewhat notable events. But together they caused the most potent disruption of Earth's ionosphere in recorded history. "What they generated was the perfect space storm," says Bruce Tsurutani, a plasma physicist at NASA's Jet Propulsion Laboratory.
To begin to understand the perfect space storm you must first begin to understand the gargantuan numbers with which plasma physicists like Tsurutani work every day. At over 1.4 million kilometers (869,919 miles) wide, the Sun contains 99.86 percent of the mass of the entire solar system: well over a million Earths could fit inside its bulk. The total energy radiated by the Sun averages 383 billion trillion kilowatts, the equivalent of the energy generated by 100 billion tons of TNT exploding each and every second.
But the energy released by the Sun is not always constant. Close inspection of the Sun's surface reveals a turbulent tangle of magnetic fields and boiling arc-shaped clouds of hot plasma dappled by dark, roving sunspots.
Once in a while--exactly when scientists still cannot predict--an event occurs on the surface of the Sun that releases a tremendous amount of energy in the form of a solar flare or a coronal mass ejection, an explosive burst of very hot, electrified gases with a mass that can surpass that of Mount Everest.
What transpired during the dog days of summer 1859, across the 150 million-kilometer (about 93 million-mile) chasm of interplanetary space that separates the Sun and Earth, was this: on August 28, solar observers noted the development of numerous sunspots on the Sun's surface. Sunspots are localized regions of extremely intense magnetic fields. These magnetic fields intertwine, and the resulting magnetic energy can generate a sudden, violent release of energy called a solar flare. From August 28 to September 2 several solar flares were observed. Then, on September 1, the Sun released a mammoth solar flare. For almost an entire minute the amount of sunlight the Sun produced at the region of the flare actually doubled.
"With the flare came this explosive release of a massive cloud of magnetically charged plasma called a coronal mass ejection," said Tsurutani. "Not all coronal mass ejections head toward Earth. Those that do usually take three to four days to get here. This one took all of 17 hours and 40 minutes," he noted.
Not only was this coronal mass ejection an extremely fast mover, the magnetic fields contained within it were extremely intense and in direct opposition with Earth's magnetic fields. That meant the coronal mass ejection of September 1, 1859, overwhelmed Earth's own magnetic field, allowing charged particles to penetrate into Earth's upper atmosphere. The endgame to such a stellar event is one heck of a light show and more -- including potential disruptions of electrical grids and communications systems.
Back in 1859 the invention of the telegraph was only 15 years old and society's electrical framework was truly in its infancy. A 1994 solar storm caused major malfunctions to two communications satellites, disrupting newspaper, network television and nationwide radio service throughout Canada. Other storms have affected systems ranging from cell phone service and TV signals to GPS systems and electrical power grids. In March 1989, a solar storm much less intense than the perfect space storm of 1859 caused the Hydro-Quebec (Canada) power grid to go down for over nine hours, and the resulting damages and loss in revenue were estimated to be in the hundreds of millions of dollars.
"The question I get asked most often is, 'Could a perfect space storm happen again, and when?'" added Tsurutani. "I tell people it could, and it could very well be even more intense than what transpired in 1859. As for when, we simply do not know," he said.
Posted by Camilla Corona at 7:39 PM