Solar Flare - The Nutrition Bar with Spirit in it!

May I introduce to you - Shannon and Mikayla Diesch!

The Spirit of Innovation Award is a national competition in which teams of high school students from across the US put their mathematical, scientific and engineering skills to the test in an attempt to create new products that can change the way people live. Even though Pete Conrad is no longer with us here on Earth, his late wife Nancy is keeping his spirit a live, making sure other students have opportunities and mentorships just like Pete had when he was a student. Nancy is another of of my inspirations and if you have a chance to talk to her, or be involved with the Conrad Foundation - please do so! 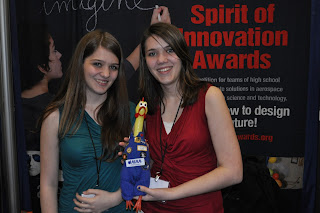 So, what's so special about these two sisters from Battle Creek, Michigan, which is Kellogg's country? After months of very hard work and with some mentoring from Kellogg's reveled a granola bar filled with nutrients, vitamins and fantastic flavor. They named it - sit down for this - Solar Flare! And that's exactly what it is. A flare of sunshine goes through your body when you take a first bite. Believe me, I got a sample and it was truly a party in my mouth! That granola bar is now NASA approved.

During my travels to NASA HQ in Washington D.C., my days at NASA Goddard in Maryland, then my visit at SpaceUp Houston and NASA Johnson Space Center, and finally my stop at NASA Kennedy Space Center in February, I met several people who told me about these two amazing girls Shannon and Mikayla. I had already known about them but hearing from so many people that they themselves had followed the story of these two, I knew right there and then: I needed to meet them!

So, I put my "feathers" out and contacted my friends over at the Conrad Foundation just to learn that Shannon and Mikayla were in in San Francisco as part of the National Science Teacher Association Conference. I was scheduled to work the NASA booth anyway, so I made it a point to go and visit them at their booth and later at their special evening celebration. And let me tell you - these two young adults are exactly what inspires me!

What was so great about our first meeting was that they both had actually hoped to meet me too! So when we finally got to say our first hellos, the excitement was huge on both sides. My first question was "How are you two doing?" and they both had huge smiles on their faces. It is clear to me that the past year has made a huge impact on their lives and they love it. A year ago they didn't think to someday be here in San Francisco showing their creation (and meeting a NASA rubber chicken mission mascot).

I talked about Space Food in an earlier post and I also talked a little about the Space Food Systems Laboratory at NASA Johnson Space Flight Center. NASA has some very specific requirements for space food and especially for a nutrition bar to be used in space flight.
- Develop a stored food system that is nutritious, palatable and provides a sufficient variety of foods to support significant crew activities on a mission of at least 3 years duration. Foods should maintain safety, acceptability, and nutrition for the entire shelf life of 3 - 5 years. Shelf life extension may be attained through new food preservation methods and/or packaging. 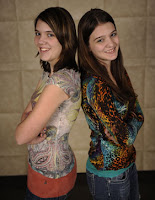 So Shannon and Mikalya decided come up with a nutritional bar and they came up with an initial Solar Flare bar just to learn that they had made a mistake in their calculation. And all of that right before the deadline to turn in their product for evaluation. So they had to start over again and redid their formula and got everything together. It as hard work, very last minute but they did it. Teamwork! They needed to meet the NASA nutritional profile requirement, including the number of calories coming from fat, proteins and carbs. They also had to put that "sunshine" burst taste into their bar. An astronaut's sense of taste changes in microgravity. And one other final and important component they needed to consider was shelf-life. See, until the food actually gets up to the International Space Station, it takes up to 9 months. And once on board the ISS, it won't be eaten right away. So shelf-live is important.
Shannon and Mikalya's Solar Flare has 16 grams of protein in a 100 gram bar. It truly contains enough energy to get you through between meals without being hungry. It tastes like cinnamon apple and cranberry with a crunchy bite to it. Of course I love the fact that they named it Solar Flare. It's just so fitting. Maybe I can become their Solar Flare spokes rubber chicken!

Learn about the Conrad Spirit of Innovation Awards here: http://www.conradawards.org/

Posted by Camilla Corona at 8:35 AM