Time Zones & Times - what it means for NASA SDO 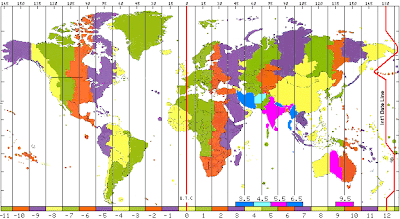 Ever wonder why we have Eastern (or Mountain, or Pacific) Standard Time? You can thank the railroads. On November 18, 1889 railroads in the United States began using the set of "Standard" timezones that we more or less use today.


Before the U.S. had time zones, how did people traveling across the country know what time it was? Until the invention of the railway, it took such a long time to get from one place to another, that local "sun" time could be used. When traveling to the east or to the west, a person would have to change his or her watch by one minute every 12 miles in order to always have the correct time.


When people began traveling hundreds of miles in a day by train, calculating the time became a problem. Railroad lines needed to create schedules for departures and arrivals, but every city had a different time!


At first the railroad managers tried to address the problem by establishing 100 different railroad time zones. With so many time zones, different railroad lines were sometimes on different time systems, and scheduling remained confusing and uncertain.
Finally, the railway managers agreed to use four time zones for the continental United States: Eastern, Central, Mountain, and Pacific. Local times would no longer be used by the railroads. The U.S. Naval Observatory, responsible for establishing the official time in the United States, agreed to make the change. At 12 noon on November 18, 1883, the U.S. Naval Observatory began signaling the change.


As Greenwich Mean Time (the official time used by the U. S. Naval Observatory) was transmitted by telegraph, authorities in major cities and managers of the railroads reset their clocks. All over the United States and Canada, people changed their clocks and watches to match the time for the zone they lived in. Quickly, the confusion caused by the many different standards of time was resolved.


The color blobs in this figure on the very top show the timezones used today around the world. Before standard time each community kept track of time. Some important times (such as noon) where announced by ringing bells or another signal. Imagine a train arriving in one town before it left the last one! Not everyone was happy and some towns continued to use local solar time until 1918.

Today we release SDO marked in Coordinated Universal Time (diplomatically called UTC) and International Atomic Time (similarly, TAI). TAI is the number of seconds since midnite January 1, 1958. A series of laboratories keep track of the march of time. UTC maps TAI to almost local solar time at the Greenwich Meridian in England (the line where longitude is 0). This means that UTC has leap seconds to keep up with the slowing down of the Earth's rotation. Right now we have added 34 leap seconds to UTC. We like TAI because it is easy to do differences in time by subtracting the TAI times. This is not true for UTC.

When you look an SDO timestamp it will say Z or UTC if the time is UTC; T or TAI when it is TAI.