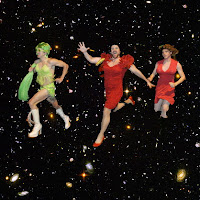 One of the headlines from today's FRR (Flight Readiness Review, the board which meets prior to a Space Shuttle launch to review the status of the vehicles, preparedness  of the teams and then sets the official launch date) was an interesting one I wanted to discuss a little further:
"Space Station altitude plan was discussed in the Flight Readiness Review. The station's altitude will be raised because of peak solar cycle drag, but not too high because higher altitudes increase the risk of orbital debris and radiation."

Let's take a look at this solar cycle drag issue.

So a couple of months ago I was at Lake Tahoe for our LWS/SDO (Living with a Star / Solar Dynamics Observatory) Science Workshop. One evening we decided to go outside and enjoy the camp fire. Somebody had the glamorous idea of making s'mores. (I don't think I have to tell you who just happened to have crackers, chocolate, marshmallow and a big stick in her survival backpack).

Anyway, I held my marshmallow over the the hot camp fire and it puffed up. In fact, my camp fire cooking skills are such, that my well-roasted marshmallow grew twice its original size. Yes, it did grow too big for my little mouth, but nothing a Swiss army knife cannot cut into more manageable pieces. But I digress...

The heat expanded that little sweet cube of delicious sugar into a much larger cube of euphoria. Something similar happens to Earth's atmosphere every 11 years when the Sun nears its solar maximum. As solar activity increases, extreme ultraviolet radiation (also called EUV) heats Earth's gaseous envelope, causing it to "swell" and reach farther into space than normal. While that sweet piece of grown marshmallow can give us a sugar high and give us extra kick, the puffed-up atmosphere causes the exact opposite; it slows down orbiting spacecrafts because of this additional "drag".

You might remember my discussions about the various layers of our atmosphere during our BTS-1 mission. Let's review this again. The troposhere is the first layer above the Earth's surface and it contains 1/2 of the Earth's atmosphere. The weather we are experiencing occurs in this first layers. Airplanes fly above the troposphere because it is more stable. That layers is called stratosphere and that's also where the ozone layer is. Now let's go a little higher, to above 50 km. That is the mesosphere and meteors burn up in that layer. One of my favorite layer comes next, above 100 km; the layer that holds the beautiful Northern Lights; the lower thermosphere. And around 300+ km above ground is where the Space Shuttle and the International Space Station orbit. And that is the thermosphere. 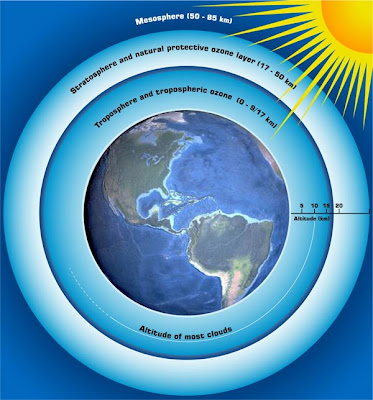 During solar minimum the gas temperature in the thermosphere is approx. 700 degrees C. That is hot but not as hot as during the solar max. It can reach approx. 1,500 degrees C. So that thermosphere has more than doubled in temperature due to the solar EUV and that increased solar heating makes the thermosphere puff out as denser layers from lower altitudes expanding upward. It can become more dense by a factor of 50 during solar max, which totally increases the atmospheric drag on satellites and the ISS.

The ISS can loose about 100 m per day in altitude due to this problem. So, what can be done? You got it, the ISS needs to move or be moved into a higher orbiter. There are several ways. Like the Automated Transfer Vehicles (ATV) which are attached to the station for some period of time, can give the ISS a boost outward. And just very recently the ATV Johannes Kepler maneuvered the ISS about 35 km higher up.

But you also don't want to go too high up. While it is more efficient for the ISS to be higher up, it also means that other vehicles traveling to the ISS will need more fuel to reach it. Furthermore, there is more space debris in the higher altitudes and less protection from radiation.

So, just like making your very own s'mores. You need to find that right spot above the flames to make it the most perfect one! 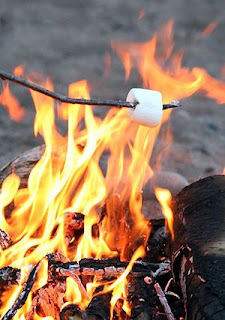 Posted by Camilla Corona at 8:23 AM