It is Saturday, May 14, 2011 in the late afternoon. The BTS-1 crew has arrived back in Houston, TX and is currently in quarantine. Yesterday was our rescue, even though we really didn't need any rescue. But I guess you can say that they rescued our capsule and equipment and just happened to find us too. By the time they got to us, we were already in Port Arthur. And because Fuzz was hungry, we stopped for cupcakes. But let's start at the beginning!

At 8 AM we were woken up by the song "99 Luftballons". Fuzz was already awake and he was dressed and ready to rock. Skye was a little nervous but as excited. As for me, I felt good, proud and ready. We got to the University of Houston-Downtown at 10 AM and most of the Ground Crew was already working hard.

Let me quickly say a huge Thank You to the fine and wonderful people of the University of Houston-Downtown. They were so helpful and really made the launch experience a fantastic experience for everyone involved:

They were responsible to organize and transport the materials for launch. There were two more students who wanted to be part of this. But one happened to be out of town and the other one is expecting a baby any day soon! (all the best from the BTS-1 crew! Kind of glad she didn't come and try to find us in the swamp area! Wouldn't have been fun!).

They oversaw the students and Don met with the the team on Saturday, checked out the payload and made sure all materials met FAA regulations.

On the Day of Launch they made the calls to the FAA to clear for launch, directed the launch tasks, making sure all the materials were properly packed for launching. Don was pretty much the Close-Out Crew!

Penny directed the overall operation including day to day communications, organized the student support and ensured all required launch materials were readily available.
Like I said - this was an amazing team and we are proud that they took such good care of the vehicle, the propulsion system and the crew!

There were a lot of tasks that needed to be performed carefully. All the equipment was laid out, the capsule was prepared, the equipment was double checked, the cameras tested and the close-out crew was making sure they had their procedures down. We were a little concerned about the early morning trajectory predictions because one of them got us into the Gulf of Mexico. But we had full trust into our ground teams. 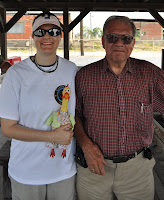 Here I also want to mention the many other friends who came out to the launch. There were the many HAM radio operators who came to support and help us, there were our great friends from NASA JSC and then there was a very special group! They drove over 14 hours from Alabama to come and be part of this launch. Not only that - but they brought Henrietta, who is also a rubber chicken. Huge thank you Melissa!

After saying our good-byes to our friends, family and team members, Skye boarded the "Inspiration" capsule first. As Mission Specialist she got the the bottom left corner. I took my seat next on the right side and Pilot Fuzzy boarded our near-space vehicle last. As the pilot he got the very good spot. The center one that let him look through the camera holes to the bottom, the side and through the top. He needed the view to control our spacecraft's ascent and descent.

At T-10 minutes the propulsion system was activated and helium was pumped into our 800 mg weather balloon. It didn't take too long for the balloon to get the right size. It is balloon science! You don't want to over or under fill that balloon. 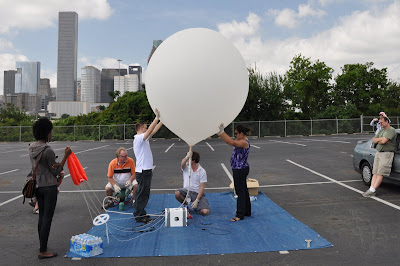 The balloon grows and bursts due to atmospheric pressure. Let's take a look at that for a second. Sometimes you see a weather balloon being launched and it looks as if someone forgot to fill it all the way up. Being partially inflated at liftoff allows the weather balloon to reach its intended altitude without bursting. That's called the "Boyle's Law".

Boyle's Law states that for a fixed amount of an ideal gas kept at a fixed temperature, pressure and volume are inversely proportional. This means that, as pressure decreases, the volume of confined gas, like the one in a balloon, increases.

Now as the atmospheric pressure around the balloon drops, the volume of the gas inside the balloon increases. So if the ballon is half-full of helium when it's launched, the expanding gas in the balloon now fills up as it rises.

So if you add too much gas, the balloon will burst prematurely. Not enough helium and it will not raise fast enough.


The Countdown
So, inside the capsule the atmosphere was filled with excitement and we heard the countdown being called out! 10, 9, 8 - I remember when the the "7" was called it hit me that we were about to head to near space. It got me really excited and Fuzz was looking at Skye and said "Let's Go!".

The launch crew released the balloon and the capsule and we started to ascent into the sky. It was a little bouncy the first two seconds but then it was just beautiful and we climbed at a very steady rate. We quickly reached 10,000 feet and the view we had over Houston was truly awesome. Fuzz did really well piloting us and we took a Northern course at first before almost turning around and going back South and then East.

Inside the capsule we were focused on our tasks at hand. All the equipment worked very well, the capsule handled the winds as predicted. While there was not a lot of space for us crew members inside the "Inspiration", we felt comfortable. Our team prepared the vehicle well and so our ascent was a smooth one.

In my next update I will talk a little more about our flight and our landing.

Fore more launch pictures and another great blog read "A Bear, a Pig and a Rubber Chicken Take Off in a Balloon..."

Read my next blog about our in-flight experience!
Posted by Camilla Corona at 5:17 PM