When I met with my friend Liz at NASA JSC, I learned about the changes that occur in astronauts' bodies in space. Basically, without gravity, their bodies decondition, which means they deteriorate. The longer they live in space, the more deterioration occurs. Their bones lose calcium and get weaker. Their muscles atrophy. Their hearts get smaller and weaker. They lose aerobic capacity and more.
As scary as all of this sounds, NASA has developed several countermeasures to keep astronauts healthy in space. Of course exercise and nutrition are very important in keeping their bodies in good physical condition. But also making sure our astronauts are healthy before going to space is very important.

So we are now at T-15 days until our BTS-1 launch and it is time for our crew pre-flight physical. This is very much like what crews have to go through before their missions to space and/or the ISS.
The Lifetime Surveillance of Astronaut Health (LSAH - because we love acronyms) is a proactive occupational surveillance program for the astronaut corps to screen and monitor astronauts for occupation-related disease. the LSAH Repository (LSAH-R because it would be too hard to say and spell out the entire word) was established to implement a research component to enable analysis of astronaut medical data from pre-flight, in-flight, and post-flight phases of space travel. 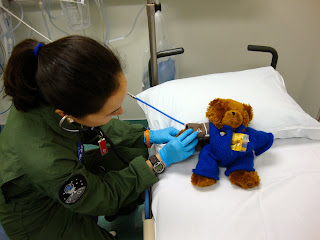 So there are several tests astronauts have to go through before a launch. I am listing only a few here.
Behavioral Observation of Training
This is for all ISS crewmembers to observe training events and to provide important data about individual behavior & crew interactions. These data may help in providing consultation and recommendations to CMs preflight in order to optimize behavior and team performance. It also provides a baseline data for supporting & consultation of CMs in-flight.
Preflight Behavioral Health Status Checks
All ISS crewmembers are required to complete a brief preflight interview & exam with the psychiatrist/psychologist to confirm crewmembers mental and psychiatric fitness for launch.
Exercise Treadmill Test
All U.S. crewmembers need to go through this test to assess preflight cardiovascular status.
Pre- and Postflight Physical Exam for Short Duration Crews
This is for all prime Shuttle crewmembers to check vital signs, head/face, ears, nose, throat, eyes, chest, cardiovascular, abdomen, musculoskeletal, skin, and neurologic assessments.
This was the majority of today’s exam.  Crewmembers have to be fit enough to deal with any emergency, so a full physical exam of their abilities to function properly is necessary.  We had already been medically screened for anything serious prior to being selected for the astronaut corps, so today was more of a check-up.  But the L-10 exam should also include checking retinas (aka a fundoscopic exam, to make sure no detached retinas or other acute eye problems could happen between now and flight), as well as a pregnancy test for females (like Camilla), which, if positive, would be disqualifying for flight, because of the unknown effects of microgravity and radiation on a developing fetus.  Any signs of underlying infection on exam (fever, pain, swelling or redness anywhere) can be further evaluated in bloodwork or urine, and either treated in time for launch or (gulp) requiring back-up crew substitution.  Other than the pregnancy test, there are no required labs for the L-10 physical, and the completeness of the exam is up to flight surgeon discretion based on the past medical history and current exam of each crewmember.  Fortunately, we had physical exams that were not concerning for needing further work-up, so escaped any needles!
Pre- and Postflight Pulmonary Assessment
This is for all ISS flights and crewmembers, both primary and backup crews and will measure the lung volume and diffusion capacity. 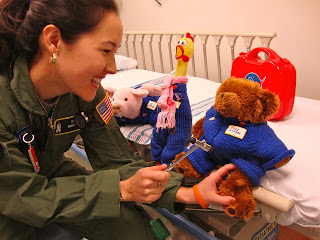 So today we had our L-10 (even thought it is L-15) pre-flight physical exam with Dr. Natacha C. Now let me tell you, Doc Natcho (that's what we call her) has been our favorite aspiring NASA doc! She not only has the passion for medicine, but she wants to take care of the NASA family and is one of my favorite Docs around (if not THE favorite!). So I wasn't nervous this morning, while good ole Fuzz was nervous and a little grumpy. Mostly because we couldn't eat anything after midnight and that also meant no coffee. See, the Doc wants a good and strong baseline in case any last-minute lab tests needed to be done, which can be affected by food or chemicals like caffeine (sorry, Fuzz). So we were there with empty stomachs.  It’s also important to have reliable baseline data to compare to in-flight and post-flight exams/lab tests so that we have a better idea of what is a true effect of spaceflight and eliminate any confounding factors (like caffeine raising heart rate, which can mimick a deconditioned heart). 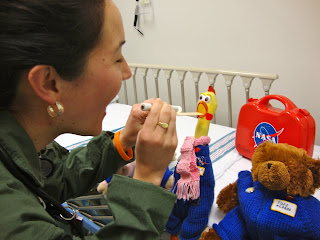 So the Doc Natcho checked for all the vitals signs. I can tell you that we all three provided very different results. But not because of different fitness levels (we are all very fit), but rather because of our different, well, nature. Simply put, the smaller an animal is, the faster their metabolism is.  Think of the size of a hummingbird compared to an elephant.  A hummingbird’s heart is much smaller and must beat faster to pump blood through its entire body compared to the large heart of an elephant.  The elephant also has more body volume available for energy stores.  So, smaller animals have faster heart rates.  Fuzz is especially lucky because he can also hibernate if necessary, and conserve energy in the event of a remote landing! 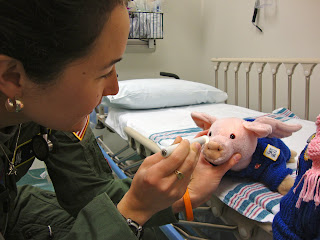 Interesting Medical Facts from the Early Days
Now I want to share some very interesting medical information from the very early days of human spaceflight.
Astronaut Stafford on Apollo 10 inhaled fiberglass particles which were liberated into the spacecraft's air after the lunar module was opened up
Astronaut Schweikart got space sick on Apollo 9. Vomited. Described as "sicker than hell." His EVA was postponed and scaled back.
Astronaut Mattingly exposed to German measles (rubella) just before Apollo 13 launch, so he was removed from the mission. (He never got ill)
Astronaut Lovell had "minor liver ailment" that disqualified him in 1959's Mercury selection.
Astronaut Eisele injured his shoulder during a zero-g airplane flight at Wright-Patterson AFB in 1965. Result: not prime crew for Apollo 1.
When urinating on Apollo 7, Astronaut Cunningham instinctively turned his back to the window, prompting Astronaut Schirra to ask "Walt, who is out there?"
Astronaut Pete Conrad dislocated his finger while fooling around during exercise on Skylab 2 (sounds like something Pete would do!)
During the Rorschach inkblot test in 59, Drs slipped blank white card into the deck. Conrad baffled the Drs by insisting it was upside down.
Astronaut Cerman got a sunburn during his EVA on Gemini 9A. Wow!
All Apollo 11 crew members took an anti-motion sickness pill before re-entry and after splashdown. Astronaut Buzz Aldrin said "At all costs we must not throw up in the biological isolation garments that the swimmers will throw in to us."
On the trip to the launch pad before the first (of three) liftoff attempts for Gemini 6, Astro Wally Astronaut Schirra lit up a Marlboro.
Astronaut Slayton was the worst snorer. Fellow Astronaut John Glenn said "He could rattle the pictures off the wall."
Astronaut Shepard had Meniere disease. Checked into the hospital as Victor Poulis to keep the whole business quiet.
Astronaut Schirra was the first American to suffer the common cold in space (Apollo 7).
The Apollo 7 crew disobeyed a direct order to wear helmets during re-entry, cause all had headcolds & worried about rupturing an ear drum.
Astronaut Cooper had hay fever. Had to convince doctors: "I can't imagine I'll run into many mixed grasses and sycamore trees in space."
And Astronaut Gus got seasick and vomited while bobbing in his Gemini 3 spacecraft after splashdown.
Interestingly, space motion sickness was only discovered as spacecraft got larger.  With very little room to move in a one-man Mercury capsule, there was little opportunity for one’s inner ear to detect micro-gravity effects.  As capsules increased in size with Gemini, Apollo and the shuttle, astronauts got out of their seats and moved around more, giving their eyes, ears and brains more opportunity to get “confused” with the lack “up” or “down.”  Astronauts continue to take medicines to prevent motion sickness as needed before launch.  This is also why EVAs are never scheduled early in the mission- this gives the crew time to adapt to their new environment.  Plus, puking in your EVA suit would be quite a mess!
A big thank you to Dr. Natacha who will be a great NASA Flight Surgeon. I sure hope she can continue to be my personal physician.
Posted by Camilla Corona at 3:43 PM