I learned about this choreographed grassroot Twitter campaign several weeks ago and I loved the idea. It's simple. The week between Christmas Eve and New Year's Eve wave at the International Space Station and let others know about it. So simple but with so much power!


ISS Wave
See, the International Space Station is now so big that it is easily visible by the naked eye. All you have to do is figure out when it will fly over your area. And there are plenty of ways to figure this out. If you are on Twitter you can follow @Twisst and it will notify you. Or there are iPhone Apps such as FlyBy or you can just go online to the NASA or ESA website and look up the information on your computer:

We all need some excitement in our lives. And why not do something like this? Why not get your child excited about science and engineering? Why not get you excited about the Why and What behind space exploration? Inspiration can lead to great things. Just look at 1957 and after the Soviet Union launched Sputnik - how many kids, young adults and grown ups where inspired and motivated to out-do what the Soviet Union just did. Granted, it might have been more on a competitive basis, but nevertheless, great things followed. Only 12 years later man set foot on the Moon! I see similarities between Sputnik and the ISS:

On October 4, 1957 the Soviet Union launched Sputnik, the first Earth-orbiting artificial satellite. Amateur radio operators monitored and followed Sputnik around the world (20.005 and 40.002 MHz) until 22 days later the transmitter batteries ran out. That was 53 years ago. Today we have a chance to watch the largest human-made object ever built in Space - by just looking into the clear night sky. And this structure has been occupied for the last 10 years!

It's not too late. There are still a few days left to not only observe the ISS, but to join ISSWave and all who have already waved in this expression of human solidarity during the Holidays. So, go look up the next ISS pass over your town, then go out, watch for it. Tell your family, your friends, your co-workers. Get excited!

ISS Wave Map - see where the ISS currently is and all the places which have waived at the 6 crew members on board the ISS.
World Map of all the ISS Waves

And here are my two waives: 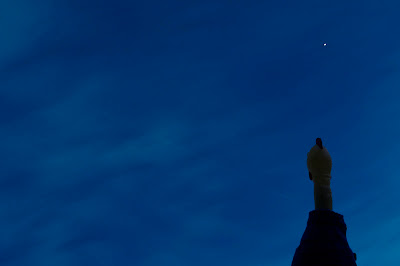 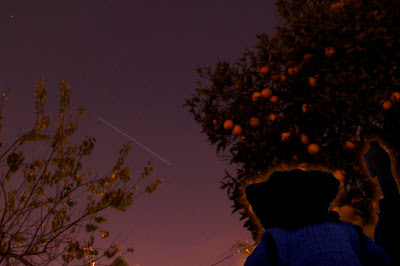