Space Weather to me is much easier to understand than weather as we know on Earth. We have so many different forms of weather down here. From sunshine to rain, snow, clouds, winds, tornados, and hurricanes. It comes in so many forms and predicting weather has become an important part of our lives. I, for one, check the weather  forecast in the morning so I know if I need to bring an umbrella or if by the end of the week, I need to expect snow or ice! So why do we want to forecast Space Weather? What's the issue and what are the benefits of predicting what's kind of "weather" is traveling from the Sun to us?
Space Weather has a few less components to it than our daily weather on our planet. There is no rain or snow. To put it very simple; it's sunshine and some magnetic fields. But its impact is very similar to weather down here. It can have a huge economical impact and it can cause casualties. That is why we would like to learn, understand and predict Space Weather better and further out. Let's start at the beginning - which in this case is on the Sun:
Sunspots show us where the Sun's magnetic fields are most intense. Magnetic fields above sunspots act like invisible nets, blocking the escape of electrically charged gas, or plasma, that constantly boils away from the solar surface. When the pressure is too great, they burst. Solar storms then erupt with the power of millions of Hydrogen bombs!
If the explosion occurs low in the solar atmosphere, the blast is short but intense. It pours out ultraviolet light, x-rays and energetic particle radiation - a solar flare. If the magnetic "nets" stretch far into the corona before they break, we have a Coronal Mass Ejection (CME), a billion tons of solar plasma speeding at over a million miles per hour!
Two to four days later, if the storm is aimed at Earth, the results can be dramatic. Induced currents can corrode pipelines, destroy power grids, and cause blackouts. Navigation and communication satellites can be damaged.

Astronauts may be exposed to high radiation doses. The most beautiful effects of Earth-directed solar storms are aurora  shimmering curtains and swirls of light in the night sky. Some solar particles find their way into Earth's protective magnetosphere. Most gather on the far side in the  magnetotail. Then, sped by a magnetic slingshot, the re-energized particles zoom in along Earth's magnetic fields and strike the upper atmosphere in ovals around the poles where atoms glow like neon lights!


So, now that we have reviewed what Space Weather is, in a very simple way, we can learn more about its impact. I will have more information for you soon! Stay tuned! 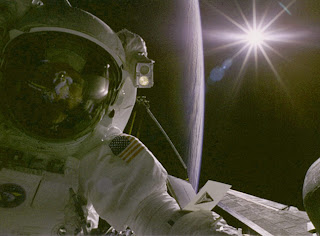 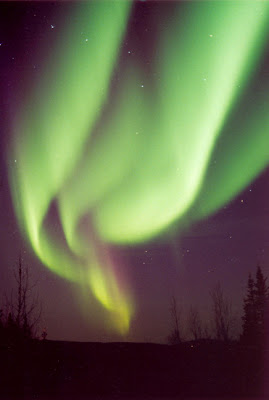 Posted by Camilla Corona at 7:26 AM