Today I am learning a lot about the "medical" site of Space Flight. That includes needles and blood. At first I was a little worried about thanks to my wonderful friend Liz here, this is really a piece of cake.


So I met up with Liz and she immediately started to educate me on Human Physiology & Behavior!


Liz is the Increment 23/24 Operations Lead for the Human Research Program science experiments on the International Space Station. Her experiments investigate the effects of spaceflight on human physiology and behavior.


So far so good! I always thought that the only real behavior change of an Astronaut happened during launch. You know,


But I guess I was way wrong on that.... (sources tell me that Astros do the wow, wow, wow thing pretty much T-1 hour until their feet are back on Earth!)


But back to Liz. So she studies the astronaut's cardiovascular systems, musculoskeletal systems, sleeping patterns, etc. That really got my curiosity and so I asked Liz what kind of changes an astronaut could expect while in Space:


"Lot of changes occur in the astronaut's bodies in Space", Liz said. "Without gravity, their bodies decondition, which means they deteriorate. The longer they live in Space, the more deterioration occurs. Their bones lose calcium and get weaker. Their muscles atrophy. Their hearts get smaller and weaker. They lose aerobic capacity and more!"


At this point I look a little scared!

"Don't look scared, Camilla!", Liz chuckled. "We want to study those changes so that we can develop countermeasures, ways to prevent those changes."


I immediately thought "Yes, by not flying to Space!" but I didn't say a word! That could have been grounds to ground me! So Liz educates me on what some of these countermeasures are.


"NASA has developed several countermeasures to keep astronauts healthy in Space", she starts. "Exercise and nutrition are very important to keeping their bodies in good physical condition!"


Doesn't that also apply to us down here?


I did wonder how Liz become involved in all of this. So I asked her about her education and how she ended up at NASA.


"I went to school in California, where I grew up. I attended UC Davis and my major was Neurobiology, Physiology and Behavior. Eager to make my dreams of working at NASA a reality, I sought out professors that where funded by NASA for their research. I became involved in NASA research early on as an undergraduate and eventually found a lab in which I decided to pursue a doctorate degree. I studied the effects of altered gravity environments on metabolism, control of food intake and energy storage/expenditure. I used giant centrifuges and also spaceflight research to complete my dissertation."


What a smart move to seek out NASA funded projects to get your hands on. And then, what did you do once you got to JSC?

"My first job at Johnson Space Center was as a postdoc in the Neurosciences Lab. I studied locomotion and adaption to novel locomotor environments such as astronauts experience upon return to Earth. I then worked on the NASA Bed Rest Research Project, in which subjects stay in bed for up to 3 months! their bodies decondition similarly to astronauts in Space. I also worked on an Artificial Gravity project in which bed rest subjects were exposed to Artificial Gravity via centrifugation in an attempt to mitigate the deconditioning caused by bed rest."
If you want to learn more about Liz, like the fact that she spends about 1/3 of her time in MCC as the lead of the non-console operations team consisting of engineers, planners, procedure writers and science support personnel... follow her on Twitter: www.twitter.com/spasmunkey
By the way, did you know the ISS has an Ultrasound on orbit for experiments and for medical issues that may arise? Liz looked at me with a big smile, grabbed me and... well, scanned me! 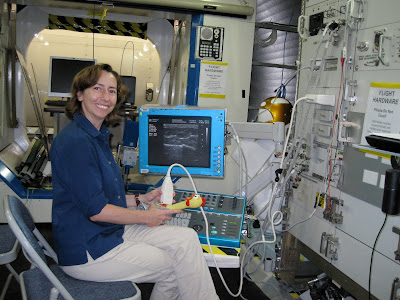 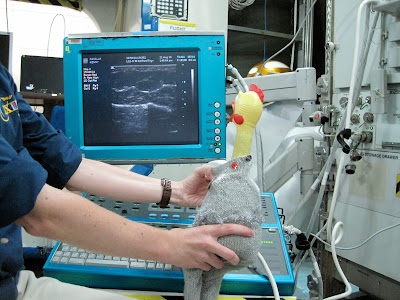 Posted by Camilla Corona at 3:20 PM