Totally stoked to have meet Mr. Buzz Lightyear! (he does look bigger in his movies... but then I am no ordinary chicken anyway). 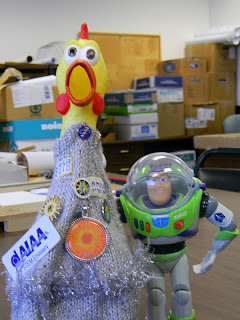 While Buzz was on the ISS, NASA realized that he didn't have his own mission patch. And all astronauts flown since 1965 have had their own patches. To correct that oversight and to engage students, NASA partnered with Disney Parks to hold a contest open to children in grades two through six to design an insignia that honors the country's first and longest-serving space ranger. 11 year old Adam Carr won that contest with his creation of a cool Buzz Lightyear patch.

See Buzz's video on the ISS
Buzz on the ISS - Video

Welcome Back Home, Buzz
Buzz has returned!
Posted by Camilla Corona at 6:49 PM