Why Pluto was killed... and did he really have it coming? 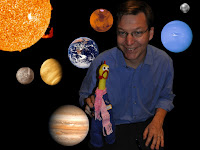 I was fortunate enough to attend Professor Michael Brown's lecture about the demotion of Pluto. Now, I am not going to spill all the beans here. Because I want to encourage you to try and see Mike's lecture or read his book "How I Killed Pluto and Why It Had It Coming". But I will give you some of my thoughts on this subject, having heard and learned a lot about the background of this first hand.


Mike, who is a Professor of Astronomy at CalTech (California Institute of Technology), didn't actually "kill" Pluto or even attend that crazy International Astronomical Union Meeting in Prague in 2006 where astronomers with red heads were debating about what to do with this little guy and very last in line! However, he is responsible and takes the blame with pride, that all these astronomers actually debated the subject of Pluto and its planet status. So what happened?

To make a long story short (because you've got to see his lecture! It is entertaining, it is fascinating and it makes sense... which by definition is an oxymoron when it comes to astronomy!). There is a bet (well, more than one) involved between Mike and one of his good friends about him discovering a 10th planet, further out than Pluto. And all of that within the next 5 years! Fast forward 5 years and 5 days - Mike did discover something "big" moving way out there in our solar system. It was bright, it was pretty fast, it was amazing. Could this be the 10th planet of our solar system? Did he just discover what no man or woman had seen before? Well, yes and no. Turns out, that body is more or less the size of Pluto. Which in comparison is half the size of our moon. But that alone was enough to start the "execution process" of Pluto. How so?

What Mike discovered was 2003 UB 313 (nicknamed Xena), which later was renamed to 136199 Eris (nickname Eris). As of this year, Eris is about three times the distance away from the Sun than Pluto is. Eris appears to be bigger than Pluto too. What's even more stunning is that Eris has a moon, which formerly was called Gabrielle and then got changed to Dysnomia. So, if it's larger than Pluto AND it has a moon too, it just got to be a planet! "Not so fast!", did the good guys at that 2006 meeting in Prague say. "Pluto is no longer a planet because we now have defined what a planet is!".

Ok, once you bring definitions into the mix it becomes "layer talk" and I have to agree with Mike. You shouldn't just go by a definition, but rather by what reality is. Let's look at what reality is in regards to Pluto:

Up until Dr. Brown discovered Eris, all of the above was well known but nobody wanted to deal with the issue of "the different one" in the solar system. Now Eris comes along and suddenly astronomers have to review the current situation and make a decision.  Either Eris becomes our 10th planet, which means that future discoveries will increase the amount of "weird" planets in our solar system, or we will accept the fact that we have eight planets and some many other "bodies" around. So the decision was made: Pluto lost its Planet status but got to be classified as a Dwarf Planet. And so did Eris, which now holds the record of largest Dwarf Planet. (don't get me started on the choice of Dwarf Planet! I still think it is misleading and they should have just called this new category Gumba). 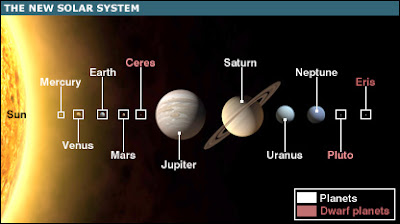 Why does this make so much sense though? Let's not look back to the past because that's where our sentimental feelings kick in and how we learned all the nine planets, how beloved Pluto was, and how we handed our kids a launch box with nine planets on it! Let's look forward! Doing astronomy according to this concept moves the entire field more to science because it moves it away from mythology. Furthermore, there will be more discoveries beyond Pluto and Eris and these bodies will most likely be similar to Pluto and Eris in composition, perhaps size and probably in elliptical orbit.

And sure enough - we discovered Sedna. Another one of those "way-out-there" object in the Kuiper Belt. Sedna takes 12,000 years to make an elliptical loop around the Sun. In fact, there is only a very short period of time (approx. 200 years) where we on Earth can actually "discover" an object that far out with such an orbit. Doesn't that mean that there could be plenty more of those Eris, Sednas and Plutos out there? And if we hadn't adjusted our thinking, would they all be planets in our solar system?

The public opinion is pretty split on this subject. And that is ok. Hang on to your Pluto-Planet idea or embrace the Pluto-Dwarf-Planet approach. Reality is that we have many more discoveries to make, we will find lots more bodies orbiting our Sun and we are running out of Greek names...

Catch Dr. Mike Brown's lecture or read his book. You won't regret it. Besides, in 2006 he was named Sexiest Geek (Alive). So much for being a Pluto Killer!