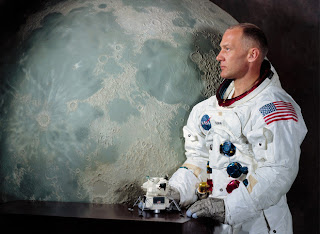 During this year's "NAVY in Space" exhibit as part of the San Francisco Fleet Week, I got to meet Fay Ann Potter - she is the sister of Astronaut Buzz Aldrin. It was wonderful to meet her and to listen to her stories. We had a few minutes to ourselves and even though I am only a rubber chicken, Fay Ann was kind enough to give me some attention. In fact, she loved the idea of my involvement to spread not only excitement, but also the desire to share knowledge about our mission and other NASA projects. 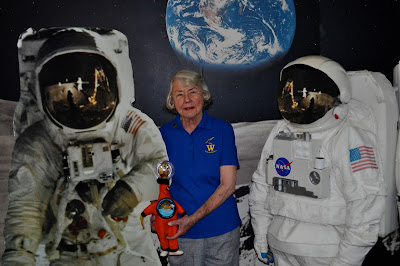 Fay Ann is a lovely woman who enjoys learning everything there is to Space Exploration. She spent a lot of time in our SDO area and had a big interest in our mission, the various colors of the Sun and why we are studying the Sun. She never followed her brother's footsteps (which is very difficult to do anyway) - but through her passion for arts and crafts, sewing and stained glass, we can see how Buzz inspired some of her work. Oh and she is responsible for Buzz's name. His born name is Edwin but Fay Ann couldn't say brother so she said buzzer. It stuck and in the early 1980's Edwin legally changed his name to Buzz. 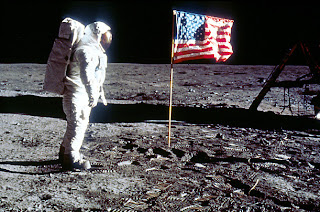 After we took a picture together I was curious about how she experienced the days around Apollo 11. Fay Ann explained how she and her family were sitting in front of the black and white TV on July 20, 1969 and how they were watching history being made. The Lunar Lander only had a steady camera on board. That camera was only pointed in one direction. Fay Ann was telling me how every time Buzz or Neal was walking by, they were happy to see them and then when they disappeared, they were afraid something would happen to them off the screen. "It was very nerve wrecking to watch!" , she said. "Buzz would talk by the TV camera and then he was gone again! Sometimes they were out of the picture for several minutes and we were afraid something had happened to them. That they fell down a cliff or a crater or that some creature got to them! It was very nerve wrecking!".
While telling the story of how she watched her brother walk on the moon, I could see how proud she was of what he had accomplished, of what the NASA team pulled off. I could tell that she was proud of everyone who not only got Apollo 11 up to the moon, but brought all three astronauts safely back to earth. 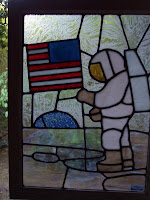 "It's funny to see all these cardboard cut-outs of Buzz all over the exhibit! There are so many it's almost weird to see my brother in every corner, around every turn!", she said with a big smile.
Then she turned to me and asked "Do you have a NASA pin?" - That's when I realized that she was only wearing a Blue Angels pin and I immediately handed her my big NASA pin from my gala dress. With a happy expression she put it on her shirt, looked at me and said "Now I feel better!".
The 15 minutes I got to spend with Fay Ann will stay with me.
Posted by Camilla Corona at 7:41 PM